GET TO KNOW NERO

Actor/producer Thapelo Mokoena and vine growers the Bosman Family celebrate the unique combination of ingenuity, resilience and excellence that is quintessentially South Africa, by producing a unique, one-of-a-kind wine: Nero 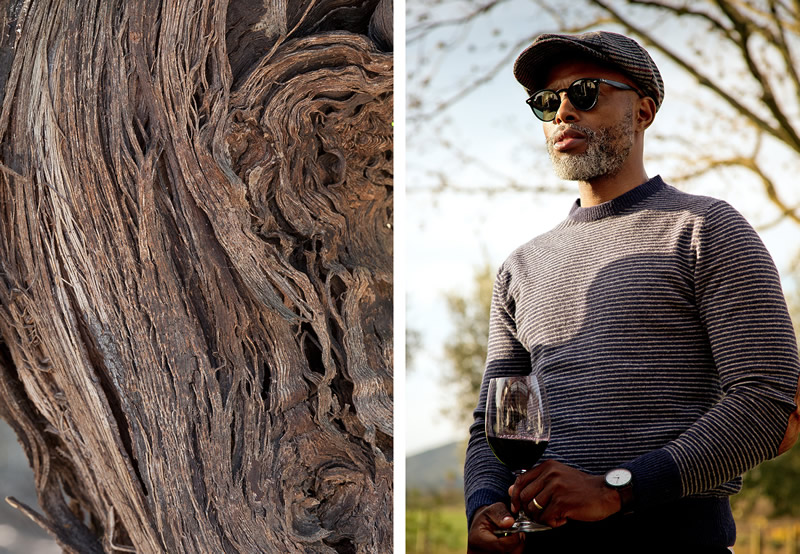 At the turn of this century, when it was clear that climate change was becoming a reality, it was apparent that the Cape Winelands would become a drier, hotter place, and that the traditional French varietals that were grown here, might struggle. Petrus Bosman struck out to find a grape varietal that would thrive in the increasingly hot, dry summers in Wellington.

After much research, Petrus travelled to Sicily, a volcanic island off the coast of Italy known for its warm, dry climate. There he discovered Nero d’Avola, the quintessential Sicilian grape.

Only 2 cuttings survived the journey back home and in the nursery, so it took many years to propagate a vineyard in the decomposed granite soils of the Bosman farm.

A decade later, Nero bears testimony to the courage and foresight to make a wine that expresses its Sicilian roots yet also celebrates its new-found home on African soil.

Thapelo Mokoena is a well-known actor and film producer whose passion for Africa, the land, the people and the provenance, is surpassed only by his desire for the expression of excellence in a new and modern configuration.

Thapelo Mokoena not only an actor but a film maker too, has launched an ambitious new project - Nero TV. This YouTube channel will take viewers on a journey to discover more about Nero specifically, and wine in general.

HOW TO TASTE WINE

The difference between wine tasting, and simply drinking wine, is that tasting involves concentration and consideration. You see, wine is not fruit juice or a fizzy drink, it is not made on a conveyor belt, but in a cellar where great attention is paid to expressing...
Read More

Though each wine has its own unique taste and character, they can all generally be divided into one of 8 categories. Getting to know these will help you pick a wine to suit every meal and occasion. Sparkling wine These originated in the Champagne region of France, but...
Read More

So wine is made from grapes, right? But how does it get from the vineyard into my glass? Here is the easy 5 step process to winemaking: Pick the grapes Grapes ripen in summer and are picked by hand or by a massive machine that straddles the vines and shakes off the...
Read More

Have you noticed wine people ‘in-the-know’ swirling the wine in their glass before tasting? Why do they do that? Is it just a snobby? Well, not actually. Most of the enjoyment of the wine, comes from the aromas. Try blocking your nose and check how well you can taste?...
Read More

HOW LONG DOES WINE LAST AFTER IT’S OPENED?

IT’S ALL ABOUT THE GLASS

It might sound crazy but wine really does taste different depending on the glass.  You won’t be banished to wine purgatory if you drink your wine out of a coffee mug, or even straight out of the bottle (!) but you will enjoy it more if it is sipped from the right...
Read More

SAVOUR THE THRILL OF THE CUTTING EDGE

Bosman Family Vineyards is an historic wine farm that has been in the Bosman family for 8 generations. They produce an extensive range of great wines to suit every occasion, as well as limited releases of unique wines made from single vineyards, or single barrels.